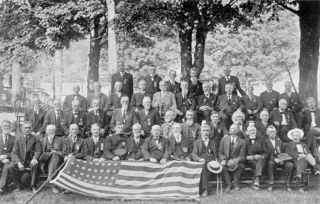 Rochester has served her country faithfully through many wars: the War of 1812, the Civil War, World Wars I and II, the Korean War, the Vietnam War, and to the present conflicts in the Middle East and Bosnia. As a token of gratitude to those who served in the Civil War, in 1867 the Town Fathers voted to procure and erect a soldiers’ monument. This 23-foot granite monument with an eagle mounted on top sits in the center of the Park facing the mountains, and is the first such monument dedicated to Civil War soldiers in Vermont, and most likely the second erected in the United States. In 1946, Rochester dedicated another memorial to those who served and died in World Wars I and II. This memorial made from Imperial Danby white marble, with a seat of Rochester Verde Antique marble, sits at the entrance to Woodlawn Cemetery.

1861-1865
197 men from Rochester serve in the Civil War. The majority serve with the Fourth Vermont Regiment In the campaigns of the Army of the Potomac. A fact of history indicates that Rochester furnished more men in proportion to its population than any other town in the United States. 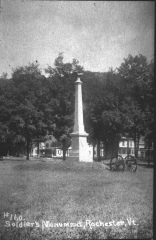 At Town Meeting it is voted to honor Rochester’s Civil War soldiers by erecting a monument on the Park.

1941-1945
152 Rochester men and women see service in World War II. A marble monument “to honor the youth of Rochester who served and in memory of those who died” in the two World War conflicts, sits prominently at the entrance to Woodlawn Cemetery.

no images were found