The History of Rochester

Because of rivalry and conflicting claims between New York and New Hampshire over Vermont lands, the political entity of the Republic of Vermont was uncertain during the Revolutionary War. The Rochester territory was too remote and mountainous to attract much attention, but the ability to grant land was one of the strengths of the little Republic, a means to acquire supporters and money to defray the cost of war. In 1780 the General Assembly made arrangements to sell unsettled and ungranted portions of the territory, and in late 1780, a grant for a new Township of Rochester was awarded, with the Town becoming incorporated in 1781. 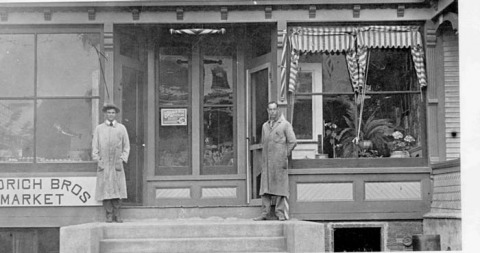 Rochester, Vermont lies in the northwest corner of Windsor County, and with 36,600+/- acres, it is the largest township in the county. It is an oddly-shaped Town, abutted by eight towns and three counties. Some say that Rochester lies either in the center of the state, or close to it. A good many brooks and streams flow into the White River whose headwaters rise north of the town in Granville. The White River flows alongside the village and through fertile farmland, winding its way to the Connecticut River. Rochester’s westerly borders touch the eastern slope of the main range of the Green Mountains, with the rocky ledges of Mt. Horrid at 2,900 feet, dominating the area. The easterly side extends to a high range of foothills called Rochester Mountain, 2,952 feet, with Mt. Cushman near its easterly border. Philadelphia Peak at 3,160 feet is the highest peak in the area. The elevation of the settled parts of Rochester range from 650 feet in the village to 1,500 feet on the higher farms, many of which are now abandoned cellar holes. Much of this land and many of the abandoned farms have become part of the Green Mountain National Forest, which today owns 12,300+/- acres in the Township. Rochester’s population has ranged from 215 at the first census in 1791 to 1500 in 1862, to just shy of 1200 in 1996.

In July of 1787, “Ebenezer Burnham generously deeded four acres to the said inhabitants & proprietors of Rochester to build a meeting house on, for burying yard, training field and such other uses as the inhabitants and proprietors of the said Rochester shall see fit to put too.” Today we have what might be called the centerpiece of the Valley – a common or park at the center of the township. Around these grew the trading center, the small industries and the village. But the majority of the early settlers lived by farming, and soon adopted different areas of the township as their homes. Homes and farms appeared in little communities called Jerusalem, Little Hollow, New Boston, Austin Hill, Maple Hill, Corporation Brook, West Rochester, West Hill, Bingo, Liberty Hill, Great Hollow, North Hollow, Middle Hollow, South Hollow, and Satan’s Kingdom. You’ll go far to find a town with a Satan’s Kingdom at one end and a Jerusalem at the other! 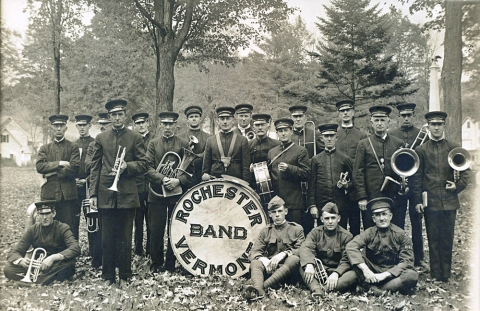 One room schoolhouses (at one time there were 15) were established in many of these communities to educate the children from grades one to eight. After grade 8 those students who wished to continue their education came to the village High School. In 1946, the one room schools were closed and all students came into the village to school. Today, many of the remaining schoolhouses are private homes. As it was generally thought that like-minded people would settle in a community, and that the place for holding meetings for town affairs or for worship would be the responsibility of the town, in 1792, Rochester voted to allow a Meeting House to be placed on the common, or park.

After a series of state laws in the early 1800s forbade taxing of property for religious purposes, private religious societies (different religious sects) were formed, each building churches and hiring ministers. Rochester’s religious community consisted of a variety of Protestant societies which were formed and dissolved in the early 1800s, but the Congregationalists, Methodists, and Universalists survived, each building their own church. The meeting house was moved from the Park in 1801, and became the Congregational Church on the hill. The Congregationalists and Universalists united in 1925, with the Methodists joining them in 1934, becoming the Federated Churches of Rochester. Today the old Methodist Church is a private home and the Universalist Church houses the Public Library and the Historical Society. The Roman Catholics depended on priests traveling over Rochester Mountain from Randolph by sleigh or horse and buggy to serve area Catholics on the fifth Sunday of the month, which occurred only about five times a year. Since 1939, St. Elizabeth’s Chapel has served the Catholic community.

Information for this history has been compiled from records at the Rochester Historical Society; the Town History of Rochester, Vermont; Its History 1780 – 1975; Wes Herwig’s Vermont Life article “A Whistle up the Valley”, and local historians.