Prior to 1780, Jonathan Carpenter reported that he had “scouted the upper White River as far as Rochester and found no evidence of ye enemy.”

1780
A Grant for the Township of Rochester is requested.

1781
Rochester’s Charter of Incorporation is issued on July 30.

1782
The first families arrive, living in fear of Indians.

1784
Ebenezer Burnham gives to the Proprietors four acres of land for “a meeting house plot, churchyard and common.” (That land today is the Park.)

1791
According to Vermont’s first census, Rochester had 215 inhabitants.

1793
A “Potash” building is moved to the common (Park) to be converted to a public building for civil and religious meetings.

1801
The Rochester Public Library is established.

1803
An outbreak of dysentery takes many lives.

1816
A year without summer—freezing cold kills all the crops.

1845
A Fire Protection company for the village, in the form of a hose and two-wheeled cart, is established.

1847
The present boundaries of Rochester are completed after land is annexed from Pittsfield,
Braintree, Hancock and Goshen making a very odd-shaped Town. 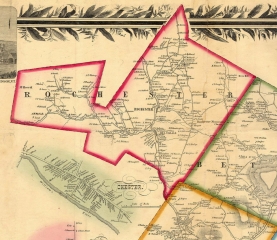 1869
By order of the Town, W. W. Williams writes the Town’s first history.

1927
A destruction flood on November 3 and November 4 does extensive damage to the railbeds and bridges of the White River Railroad, roads and personal property. 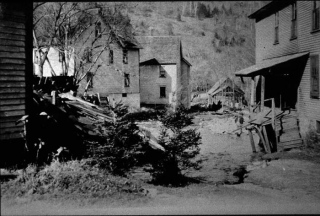 1946
The Lyman Hall community (Quarry Hill) is established in the North Hollow.

1967
The White House Christmas Tree, a tree raised by local farmer Riley Bostwick, is sent off to Washington. Riley and Helen Pierce attend the lighting ceremony.

1970
The Great Hawk Colony is developed as a resort-second home community.

1972
Valley Rescue Squad is chartered in November with 36 members.

1976
Rochester celebrates the Bicentennial of the United States of America on July 3 and July 4.

1977
A small but meaningful observance of Vermont’s becoming a republic 200 years ago.

1981
Rochester celebrates its 200th Anniversary as a Chartered Town on July 25 and July 26.

1982
A Christmas Tree for Washington, when another of Riley Bostwick’s carefully nurtured trees is selected as the National Tree.

The 200th Anniversary celebration of Vermont’s becoming the 14th State in the Union.

1995
The U.S. Forest Service breaks ground for their new building north of Rochester Village. This building is dedicated later in the year.

1997
A Verde Antique marble historic marker is erected on the Park on July 4, and dedicated to the Quarry’s long-time value to Rochester.

1999
100th Anniversary of the groundbreaking for the Peavine railroad.